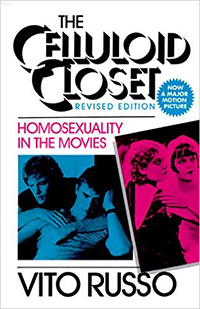 This is where CGiii began...

I was given this book many years ago...a book that stripped away all the joy that cinema had to offer.

A book written by a very angry man who thought that all gay representation should be of happy gay problem-less couples.

It has been said that time has not been kind to The Celluloid Closet...unarguably a true statement.

Still, Vito Russo was one of the first to write about the subject...albeit with an off-putting rage and outrageous idealism.

As an activist (and like all activists), he certainly had much to be angry about...especially, then.

Inequality was rife. The age of consent was a nonsense. And, AIDS had reared its ugly head.

Army of Lovers or Revolution of the Perverts